So I wore a Hijab for a day

February 1st is World Hijab Day. Today I had the privilege at my college to learn about the significance of the Hijab. For the longest time, I didn’t know how to feel about Hijabs and I realized today that it was because I knew nothing about them. Luckily, I was able to be educated about them today, thanks to the Penn State Berks Muslim Student Association.

The greatest thing I learned about the Hijab today that wearing it is a choice. The biggest misconception I had about them was that it was a religious oppression, being forced to wear them. I could not have been more wrong! If anything, I see them as being very freeing. The women (and men) have the freedom to decide whether or not they put their body on display. 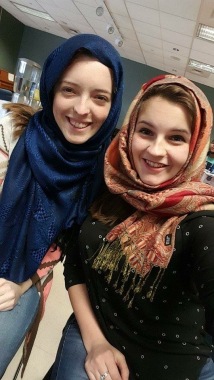 After learning how to tie them and wear them different ways, we were asked to wear them for the day, if we felt comfortable doing so. Initially, I was scared. While my campus is very welcoming, I was very nervous about what people would say and how strangers would act around me. While I was nervous at first, I soon found myself feeling very empowered. I had a choice to wear it, and while I did get one or two sideways glances while grabbing coffee at WaWa, I felt so in control of myself. Sure, I only wore it for a few hours, but it made me realize just how freeing it is to make that choice.

I believe everyone has a small fear of things they don’t understand, and for many people, religions different from your own can always be a little uncomfortable. For me, asking questions about religion is always scary, because you don’t want to offend anyone, or make them uncomfortable. That’s why I am so happy the Berks MSA held this program today. Those questions were answered and I realized just how awesome this visible aspect of the Muslim religion is.

Learn about the things you are unsure of. Take opportunities to get educated about them, you may learn just how beautiful (and empowering!) things are that you don’t currently understand!

Now go out, try something new, and learn about the things that you don’t understand!

Keep up with me!